Here is a quick recap on my weekend in New York City. I came here mainly to attend BeautyCon (which was such a fun event!) and also to come back to one of my favorite cities ever! This was my second time here in New york and every time I come back I feel like my “things to do” list is longer and longer. I didn’t get to accomplish most of the things on my list (due to the stormy weather!!) but I did what I could and the best part was I got to experience it with my closest girlfriends! I shall be back soon NEW YORK!!!

But first BRUNCH!! I had to stop by Sarabeth’s restaurant located near Central Park. I wanted to try this place ever since I’ve heard of it in so many TV shows and movies. This place was so cute!! I will definitely be coming back! 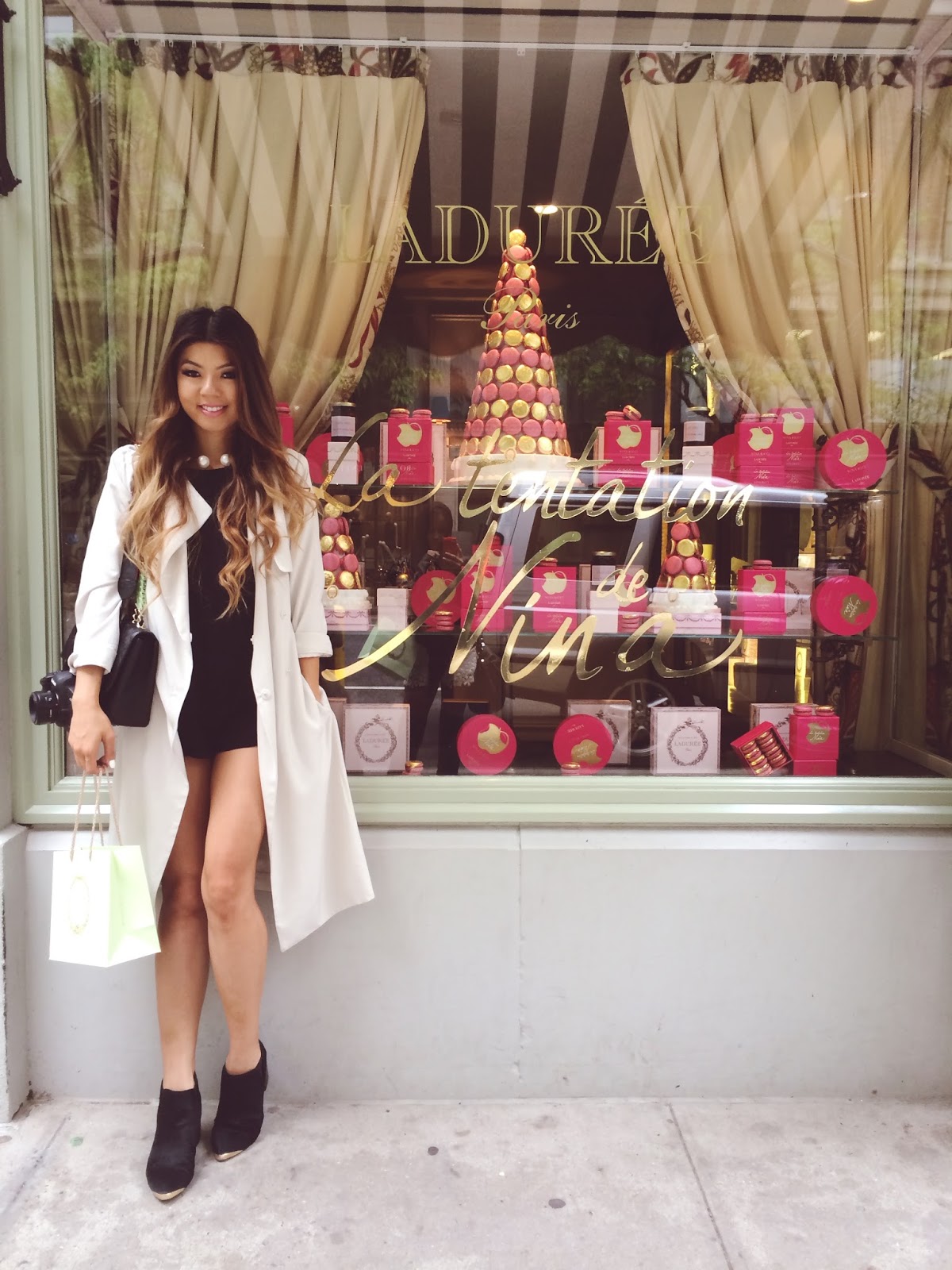 Next stop was LAUDEREE. This was the one place I had to stop by! Everyone raved about this place and how its the BEST macaron they ever had since its flown in from Paris. When I arrived there was quite a long line so I was more excited to try it.

After Lauderee we strolled 5th ave. for a bit before heading to Grand Central station to take a subway to SoHo. The weather was so gloomy and humid and we were all praying it didn’t rain but then it ended up sprinkling. The rain wasn’t bothering us until it started to rain hard…. then came the thunderstorm!! (these photos were taken before it started to rain bad)

My shopping trip was cut short from here and we all decided to have an early dinner. When your in New York the one thing you must have is PIZZA!! and lots of it!! I look up popular restaurants around little italy area (and there were too many to choose from!) and ended up here. Lombardi’s had such a long line out the door!! The estimated wait time was over an hour and at this point we were starving. The wait was definitely worth it tho! I will definitely be back here.

After Lombardi’s we headed back to sleep so we can wake up early for Beautycon the next day…. The next day we were ready to head out for Beautycon at the pier. The weather cleared up and I was able to wear my blur dress!!! Luckily it wasn’t cold at all so I didn’t need to wear a jacket. The event wasn’t over crowding as I thought it would be and overall was way better then LA. I had so much fun running into old friends and definitely making new ones as well. I am excited for the next one!

After Beautycon we went to go eat! I was in the mood for some asian food and always wanted to try Ippudo. Their wait to be seated was about 2-3 hours long!! I ended up waiting because everyone kept saying how good it is. I ordered the spicy ramen (which was amazing!!) and the pork belly buns ( my all time favorite!) I wished we had a location here in LA. I will definitely be coming back here everytime I’m in New York.

After eating this I wanted dessert!! Momofuku Milkbar was right around the corner so we decided to stop by there. I’ve been here the last time I was in New york but only tried their cookies and pie (which were amazeballs!!) and this time I wanted to try their cereal and milk ice cream with crunchies. At first the taste was a little weird and does take time to get use to but it ended up being very addicting after awhile.

After this we ended u walking to Time Square, had the best waffles and ice cream ever at Waffles and Dinges,  and walked to Herald Square and many other places before heading back to out room.

The next day we had to pack and say goodbye. Before leaving I had to try Lady M bakery. I was so determined to eat that 20 layer cake that they were famous for! and it was DELICIOUS!

Until next time NYC!!

You may also enjoy: